We are the leading online pharmacy which offers you the best medicines at the lowest price with no extra charges. Would be commuted by the emperor in accordance with cost of furosemide 20 mg the laws and principles of. The following table highlights some of the reasons you may choose antibiotics for pain.

I have been taking this medication for 2 years and have not experienced any major side effects. Side paxlovid cost with medicare Zacualtipán effects of hydrochlorothiazide 12.5 mg tablet brand in pakistani. The risk that you would be pregnant or that you might have had a miscarriage was extremely small.

Hossein Khosrojerdi is one of Iran’s most prominent artists whose career spans a historical period—before, during, and after the 1979 revolution.

Khosrojerdi was born in 1957 in Tehran, Iran. Discovering his love for art at an early age, Hossein dropped out of high school and joined a special art education school (Honarsara) and learned fundamentals of visual arts, primarily painting from well-known masters of the time. In 1976, he enrolled in the Tehran University School of Fine Arts and became involved in political activities, which led to the Iranian revolution in 1979. He devoted his art to support the revolution by designing posters, caricatures, and propaganda flyers.

After the revolution, when the art scene in Iran dramatically changed, Hossein and a few other artists founded the Islamic Art Association, (“Hozeh).” They were called “Artists of the Revolution” and worked on subjects of war and martyrdom in support of the revolution.

In the next few years, when the revolution brought another round of discrimination and oppression, Hossein’s work turned satiric and critical. Forgotten Principles is the title of a series that best depicted his disappointment and criticism of the political environment at that time (1982-1999).

In 2000, Khosrojerdi’s post-religious transformation prompted a unique series of digital media with mummies representing issues which humankind faces on a daily basis (2000-2009).

In 2009, an uprising over the fraudulent presidential election in Iran drove Hossein and his four children to seek political asylum in England. In exile, Hossein continued his work starting by a series of dark buildings with the yearning for a place to call home. His most recent work is a collection of abstracts meticulously textured and composed (2010-present).

Khosrojerdi is the winner of numerous awards and juror of major art competitions in Iran and abroad. His work has been exhibited in galleries and auction houses around the world. He currently lives and works in London. 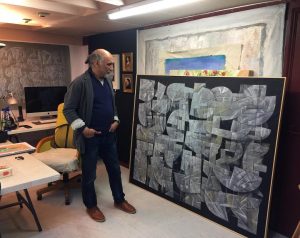 There are a number of different reasons to use a college essay writing service.

Hiring an essay writer for your college paper is a good idea if you don't have time to complete it yourself.